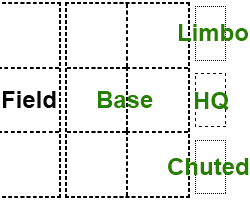 Zones can never be TARGETS. Instead, the Player that Owns the Zone is targeted, and the zone is referred to as "the target PLAYER's zone".

HQ is your HeadQuarters. We use the terms Main Deck synonymously and Deck imprecisely. Cards in play originally start in this zone. We draw cards from this zone and move them to other zones, most often the Base (following).

The Top card of every player's HQ is visible and has a space in the interface. Along the bottom edge of the Top card is the number of cards remaining in the deck.

The Base is your hand. We use the term Hand synonymously.

The Base has a rectangular grid of Spots into which Units go.

In the standard Formats, the Base is usually 2x3 = 6 Spots. Your Base is typically arranged vertically on the right of your screen, or horizontally along the bottom.

Every Player has a Billet that specifies how many Cards they may hold in their Base. Billet starts at 4 for all Players, and may never be lower than 2 nor exceed 6:

Billet is applied during the Quarter Effect, which frequently happens because of the Prep Base Action.

The Field has the rectangular grid of Spots into which Units go. We use the term Battlefield synonymously.

In the standard Formats, the Field is usually 3x3 = 9 Spots. It is prominently displayed near the center of the screen. All Players' Bases are contiguous with the Field.

Limbo is the discard pile where Cards typically go after they Leave the Field. We use the term Discard Pile synonymously.

Cards in Limbo are ordered by their time of entry, with the top being most recent.

In the interface, the number of cards in each player's Limbo is displayed. When a player clicks on that number, a zone flyout displays the cards. Cards in Limbo can be TARGETS of appropriate Abilities.

Cards in Limbo can be and often are actively re-used as part of the play of the game.

Chuted Cards are completely removed from play. Once in the Chuted zone, Cards may not Move to any other Zone.

Cards in Chuted are ordered by their time of entry, with the top being most recent.

Chuted is given a flyout similar to Limbo (above). Chuted Cards cannot be TARGETS. All Card Abilities of Chuted cards are nullified. However, Effects of Cards in other Zones may depend on Chuted cards, in particular the total number. Thus, Chuted cards still indirectly affect play.

Reinforcements are extra sideboard cards that do not start in play. We use the term Sideboard synonymously. They are in addition to the Main Deck, and are typically used in Matches and Events.

Cards in Reinforcements are ordered by their time of entry, with the top being most recent.

Reinforcements is populated differently depending on format.

The Vanguard is exactly 9 Enlisted cards in sequence taken from your Main Deck list. Every format has a Vanguard N variable that specifies how many of these cards are initially moved to your Base.

Cards in Vanguard are not only ordered but also placed into a 3x3 grid that determines their Placement in your Base for the Initial Hand.

Vanguard is not displayed on the play screen, but the order is displayed (and changeable) from game start screens.

Once the Vanguard zone is used to determine your Initial Hand, then it is discarded.

Occasionally Effects will require a temporary Working Zone where cards reside. Cards entering or leaving the Working zone do not trigger zone movement effects if they are returned to the same zone.

An example is the Requisition Effect.

TTD Include explosion view of zones from game screen

Retrieved from "https://linepirates.fandom.com/wiki/Zones?oldid=9627"
Community content is available under CC-BY-SA unless otherwise noted.