Cards are a basic Element of the Game. There is only one Type of Card, which represents a military unit. When a Card is Placed into a Spot it becomes a Unit, so sometimes we'll refer to the Unit Type. Units persist until they reach 0 Life or are Removed (usually to Chuted).

Any CARD may be the TARGET of an Effect. 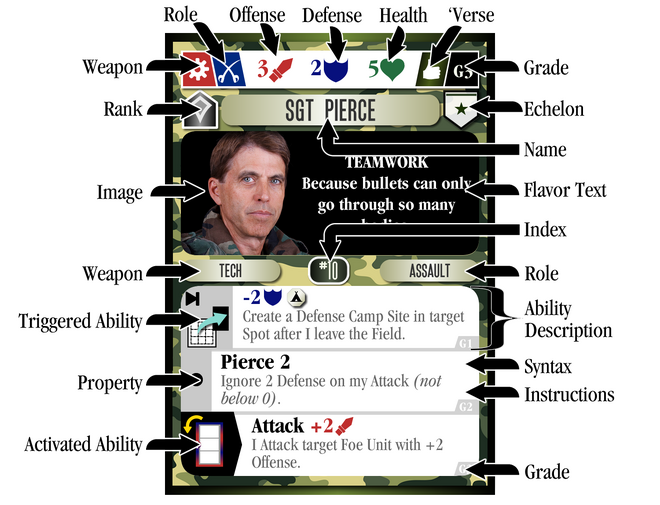 There are four kinds of Card Attributes:

We use the word "Card" to refer to three different Instances:

The Instance can usually be inferred from context. We use the full phrase for disambiguation where necessary.

Each player has a card that represents them called the Player Card. This card is named the player's name and has the picture of their avatar (usually taken from their facebook account). This card grows in power and experience as the player does.

TTD Create a card template and have all card pages follow it. We'll want the picture and stock card stats. We may want a separate template for collectibles (outlining availability, having animations, etc.)

TTD Then create Card, Collectible Card, and all card attribute categories and markup as appropriate. Cards will probably be the biggest thing we'll have to Categorize the hell out of. People will probably want them broken down by 'Verse, Rank, function, etc. Here's where using Categories to give us multiple looks into the same data is all kinds of awesome.